The taxing matter of sugar reduction

New year, new you? Just don’t do a juice diet…

Veg-first: A novel approach to weaning 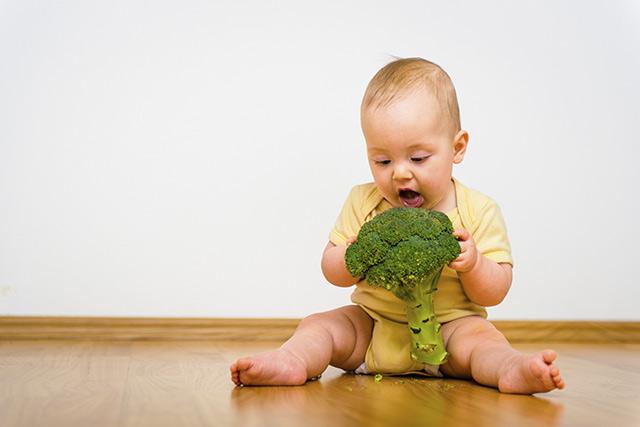 Traditional weaning practice is to give babies bland or sweet foods for their first tastes.  Using a vegetable first approach is a novel but evidence based way to help babies learn to love vegetables; a habit that lasts potentially for many years.

Babies are born with few taste preferences but they do have a naturally sweet tooth.  Breastmilk is sweet and so this is beneficial for the first months of life, where breastmilk (or infant formula) is the sole source of nutrition.  However, once weaning starts, it’s apparent that sweet foods like fruits are much preferred and greater quantities are eaten compared with vegetables, particularly the more bitter, green varieties.  These tastes, that are typically less sweet or even bitter, are often rejected at first, or met with a surprised or even disgusted expression, leading parents and carers to believe that the baby doesn’t like the food.  Often, if it’s not accepted within a couple of tries, the vegetable isn’t offered again and is written off as a disliked food.

However, during the first few weeks of weaning, babies are really receptive to new tastes and often will accept a new flavour very readily, with a little patience and perseverance.  Even a taste as bitter as broccoli or as unfamiliar as artichoke can be accepted if it’s offered up to 10 and sometimes even fewer occasions.

The key is to start with vegetable tastes and not fruit.  In one study, babies who were given a variety different vegetable tastes, which were offered over 18 days, ate more vegetables not just in the immediate period following the trial but also at age 12 months, compared with those who were given only fruits.  This suggests that offering a variety of vegetables for the first 2-3 weeks of weaning influences taste preferences for at least 6 months, if not longer.  Some data suggests offering a wide range of vegetables and fruits at age 6 months predicts intake at 7 years!

Another study advised British, Portuguese and Greek parents to offer a variety of 5 different vegetables, with a new one each day, repeated for 15 days, compared with a control group who were provided with country specific ‘usual care’ advice.  Interestingly, British parents reported that their babies ate more of a new, unfamiliar vegetable (artichoke), following the 15 days of vegetable consumption and also seemed to have a higher liking of this vegetable compared with the control group.  This was not the case in Portugal or in Greece, where ‘usual care’ advice and weaning culture may differ from that in the UK.

It’s imperative that policy makers and key influencers like healthcare professionals start to encourage this veg-first approach, as it could improve children’s immediate nutritional status and also their future health outcomes.

For more information on weaning, read my previous blog on practical ways to approach fussy eating.