Is your office cake culture taking the biscuit?

Opinion – What DO we do about obesity?

The Truth About Almond Milk 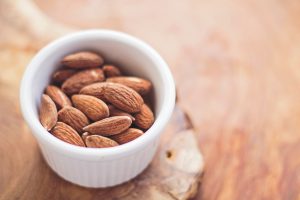 I recently worked on a recipe book that included a homemade almond milk recipe.  I decided to try it out and was shocked at how much of the almonds I actually wasted, as most were left over as dried up meal.  Thinking that shop-bought almond milks must be able to ensure that more of the nutritious almonds make their way into the final product, I took out my calculator and looked at some labels.  Prepare to be shocked at the results!

Making almond milk is pretty easy, if a little messy and time consuming.  You take some almonds (100g in this case) and soak them in water overnight.  You then stick them in a blender with some water (400ml) and an optional pinch of salt, blitz and then strain the mixture through a muslin cloth to obtain the ‘milk’.  You’re left with a large quantity of almond meal which you squeeze to extract as much of the ‘milk’ as you can but even then, about half the original weight of almonds is left in the meal.  Of course, at home, you can use this in homemade cereal bars and smoothies or sprinkle it on cereal so it’s not wasted as such.

From my calculations, I worked out (making a couple of what I think to be reasonable assumptions) that 400ml homemade almond milk contains about 50g almonds, so it’s around 12.5% almonds.  It seems like such a waste of good almonds and I felt sure that it was simply my inefficient pulping and squeezing of the almond meal that resulted in such a poor yield.  So I checked out the almond content of a few commercially produced almond milks.

I was pretty surprised to find that most shop bought almond milks contain 2% almonds or less, the rest of the milk being water with a little added salt, sometimes some sugar (depressingly more sugar than almonds in some cases) and some stabilisers or emulsifiers, plus added vitamins and minerals (which obviously my homemade almond milk lacks).  Now manufacturers undoubtedly start with fewer almonds than I did, as almonds are expensive but I imagine there are still a lot of wasted almonds that don’t make it into the milk.

What do these differences do to the nutritional qualities of homemade vs shop bought almond milk?  Obviously, commercial almond milks are fortified so will provide calcium and potentially other micronutrients.  But the crucial difference is the amount of almonds and the presence or absence of added sugars.  Clearly more almonds means more calories and fat but also more protein, fibre and vitamin E.  Check out my comparison table for a quick summary of macronutrient differences.

The choice is yours.  It’s undeniably a little time consuming and messier to make your own almond milk but you get more nutritional bang for your buck and you get to use the leftover almond meal so there’s much less waste.  Shop bought almond milk is fortified which is a bonus and a low fat dairy-free alternative to cows’ milk but do you really want to pay for a product that is 98% water?  My advice: cows’ milk or soya milk are more nutritious alternatives but if you enjoy the taste of almond milk, try making your own.