Clean eating is dead! Long live the next fad.

Hands off our roast potatoes! 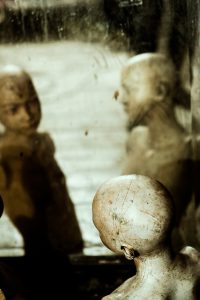 Social media can be a tremendous force for good but does its darker side harbour problems for our body image and mental health?  I review the evidence and offer suggestions for how we deal with this potential ticking time bomb for our mental health.

Much research has shown, over the last two decades, that the ‘thin ideal’ portrayed in the traditional media (films, television, magazines, billboards etc.) is linked to negative body image and subsequently an increased risk of disordered eating.  The near constant presence of this thin ideal in some areas of the media normalise a body type that for most is neither realistic nor achievable but once this image becomes internalised in an individual, it becomes a reference point for comparison and body dissatisfaction is therefore more likely.  This is predominantly but not exclusively found in young women with the ‘lean muscular ideal’ emerging as the aspirational body type for men.  Given the huge popularity of social media sites such as Facebook and Instagram, what impact does this new form of media have on body image?

Recent studies have found correlations between social media use and negative body image.  For example, when using Facebook, engaging in ‘social grooming’ behaviour was associated with an increased ‘drive for thinness’.  This sort of behaviour includes profile checking, photo or status liking or engagement and general communicating.

Other studies have reinforced this finding.  It is not merely time on the internet or time spent on social media that increases the risk of negative body image, it is time spent engaging in activities that promote appearance comparison.  Greater exposure to photographs on social media is associated with greater body dissatisfaction and this appears to be most pronounced when making appearance comparisons with distant peers, rather than close friends or celebrities.  This may be because we see our close friends in person but distant peers i.e. people with whom we have little regular in-person contact, including people we follow, are seen only online.  Many images presented on social media are idealised using lighting and flattering poses, followed by photo editing, making it hard to judge whether the pictures posted by distant peers are genuine.  Moreover, unlike celebrities, who have vast resources to invest in their image, distant peers are judged to be more similar in lifestyle or income and hence the negative body image that follows appearance comparison with them is more intense.

The ‘drive for thinness’

The drive for thinness is mediated by making repeated appearance comparisons.  People with more friends or contacts on social media and those that spend more time in viewing profiles, media and interacting with the content of others appear to have a greater drive for thinness.  However, not everyone reacts the same way – a study showed that Facebook use may be linked to depressive symptoms but only in those that feel envy towards others after using the site.  Given that social media users rarely post negative visual content, overall, users are exposed to sanitised, filtered and idealised images and feelings of dissatisfaction and envy are more likely in those with already fragile body image.  Moreover, research shows that those who are most influenced by the thin ideal and who are most dissatisfied with their body are most likely to seek out photo content on social media, thereby reinforcing existing body image issues.

What about men and older people?

Most studies are carried out on student populations and, in spite of attempts by researchers to recruit more male participants, usually the study populations are all or mostly young females.  Those studies that do include men show that, while they are less likely to make appearance comparisons than women, when they do so, they still experience a drive for thinness but so far the literature has not revealed a drive for muscularity.  Given the large numbers of men attending gyms and consuming high protein diets with the goal of a more lean and muscular physique, future studies may reveal a drive for muscularity following appearance comparisons on social media.

The cult of fitspiration

The majority of research to date has studied the effects of using Facebook.  Given the photo-sharing based nature of Instagram, it’s likely that appearance comparisons are more frequent in users of this platform.  A very recent study compared a group of young women who regularly post ‘fitspiration’ images on Instagram with those who post travel photos.  While ‘fitspiration’ images have positive intentions, they tend to represent only one body type – muscular and lean – which is unattainable (and potentially unhealthy) for many.  Extreme exercise and dieting are often encouraged and the overall benefits relate to appearance and not health.  In this study, the fitspiration group had significantly higher levels of disordered eating and compulsive exercise, with almost a fifth of the fitspiration group at risk of a clinically significant eating disorder.

In summary, the thin ideal is widely repeated across all forms of media and once this ideal becomes normalised in an individual, body dissatisfaction may result following repeated appearance comparisons with others.  This may be more profound when social media platforms are used for making these comparisons, given the idealised nature of many of the photos and abundance of images.  Body dissatisfaction predicts disordered eating and with numerous diets and clean eating plans being shared on social media by young and attractive individuals, there is a perfect storm brewing that could result in a generation of self-conscious, disordered eaters.

What to do: Parents and schools

What to do: Individuals

The bottom line is that we need to realise as a society that our body image is not our most valuable currency.  We need to prioritise empathy, kindness and wisdom before beauty and youth.