12 weeks to your wedding: 3 step prep

Hands off our roast potatoes! 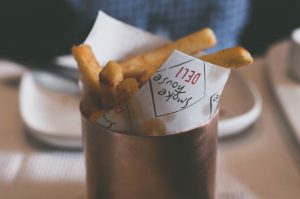 This week, a funny thing happened.  When the not-so-new news story broke that browned toast and crispy roast potatoes might give us cancer, the nation held up its hands and, as one, declared, “Enough is enough!”  We’ve accepted that too much sugar, salt and the wrong kinds of fat are bad for us but seriously, ROAST POTATOES?  That’s a step too far.  Let’s look at the facts behind the headlines.  In summary, as Douglas Adams advises, “Don’t panic.”

The headlines stem from the publication of the Food Standards Agency’s (FSA) new campaign “Go for Gold” to help people minimise how much acrylamide they eat.  Acrylamide is a (potentially cancer-causing – more on this later) chemical that is formed when starchy foods are roasted, grilled, baked, toasted or fried, especially at high temperatures or for a long time.  To minimise acrylamide levels, the FSA advise that bread, potatoes and root vegetables are cooked to a light golden colour.  They also advise eating a varied and healthy diet (which is, of course, no bad thing).

Concerns about acrylamide in roasted and toasted starchy foods are not new.  It’s back in the news because a new study of acrylamide has indicated that some manufactured starchy foods like crisps, coffee and biscuits contain higher levels than the ‘recommended maximum’, prompting alarming comparison tables in the media.  To be clear, there are no legal maximum limits on acrylamide in food.  We simply don’t know enough about the risk to human health of consuming acrylamide to set limits so these are just ‘indicative values’ set by the European Commission for monitoring purposes.

It’s worthwhile considering the ACTUAL risk.  Very high doses of acrylamide (vastly in excess of the amount humans could consume) have been shown to increase the risk of mice getting cancer.  Acrylamide is therefore classed as a probable human carcinogen.  To put this in context, acrylamide shares this classification with activities like eating red meat, being a hairdresser and working shifts.  In spite of vast amounts of research that has been reviewed by the European Food Safety Authority (EFSA), acrylamide intake is not associated with increased risk of cancer in humans.

Crucially, when the actual intake of acrylamide by the population is calculated from dietary surveys, it is a minute fraction of the amount toxicologists believe is still unlikely to increase the risk of cancer (in mice).  Adults with the highest consumption of acrylamide could consume 160 times more and still only just reach that level.  We don’t know if that amount will have the same effects in humans as it does in mice but no study to date has shown an increased risk based upon the actual amounts of acrylamide consumed.

If you’re really interested in the detail, I urge you to read the blog from the Cambridge Professor of statistics, Sir David Spiegelhalter, which contains an excellent review of the evidence and an assessment of the actual risk the public of consuming acrylamide.

My concern, is that campaigns like this and the resulting media reports that restaurants will be fined for serving roast potatoes or triple cooked chips, that are based on weak evidence and a vanishingly small actual risk to health, serve only to alienate the public and risk them dismissing truly important health advice.  Obesity is a major cause of cancer, diabetes and cardiovascular disease and a far, far greater risk to public health than consuming acrylamide.  The last thing we want to do is put the public off listening to any health advice at all.