12 weeks to your wedding: 3 step prep

On fat shaming and vile hypnotists 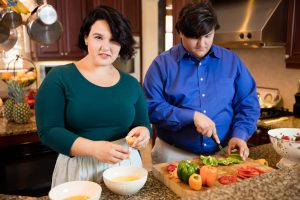 This week, I learned who Steve Miller is.  No, not the lead guitarist in the band that spawned rock classics like ‘The Joker’ and ‘Abracadabra’.  Apparently, the Steve Miller in question is a hypnotherapist, starring on Sky’s Fat Families.  I’ve missed out on this incisive televised sociological experiment but his comments on obese NHS staff that hit the headlines this week succeeded in grabbing my attention.  Apparently, as part of his ‘slim acceptance’ campaign, obese NHS workers should be made to publicly display a badge bearing the words “I’m fat but I’m losing it” and restaurant menus should feature warnings that fat people should avoid certain dishes.  Clearly, this sort of fat shaming is utterly offensive but is it actually effective in encouraging weight loss, as Steve Miller would suggest.  According to recent research it may be counter-productive.

A recently published study suggested that experiencing the stigma of obesity can harm not just mental but also physical health.  We know that weight stigma, directed at the individual by external forces (media, peers, healthcare professionals) or originating from within, can increase the risk of depression, anxiety, body dissatisfaction, and low self-esteem.  The stigma that the individual heaps upon themselves, known as ‘weight bias internalisation’ or WBI, often arises from long term experience of stigmatisation from others.  In this study of obese individuals, participating in a one year weight loss programme, those with WBI were identified and their cardiovascular risk factors were compared with participants without WBI.

While the results weren’t conclusive, those with a high level of WBI had higher blood levels of triglycerides, which is itself a contributing factor in metabolic syndrome, even when controlling for BMI, demographics and presence of depression.  Metabolic syndrome is often seen in obesity and is characterised by abnormal blood lipid profile, insulin resistance and potentially type 2 diabetes.  What is particularly interesting (and concerning) about this research is that independently of any health issues caused by the weight itself, the negative feelings resulting from being stigmatised appear to be associated with physical risk factors for metabolic syndrome.

So why does weight stigmatisation have physical effects?  Most studies are observational in nature so can only identify correlation and not cause.  One theory is that the stress caused by the negative emotions increases both blood pressure and the release of stress hormones like cortisol, which in turn can affect blood lipid levels and insulin control.  Some of the biochemical changes resulting from this stress can lead to increases in appetite, which may be responsible for binge eating and further negative emotions, guilt and stigmatisation.  It’s a self-perpetuating cycle.   Having a poor body image or being obese can result in individuals exercising less, for fear of further negative attention or because it feels uncomfortable, again with consequent effects on health.

Being exposed to stigmatisation such as the disgusting fat shaming meted out by bottom feeders like Steve Miller is clearly deplorable and most normal people would consider it to be hugely offensive and wrong.  I also take exception to the way obese people are represented in the media, shown as morbidly obese individuals, faces obscured, often clutching fast food.  That’s why this blog features only positive images, taken from the Obesity Action Coalition’s gallery.  But stigmatisation takes many forms, some veiled with positive intentions.  Many doctors, nutritionists and dietitians will encourage weight loss with the best of intentions, with a healthy BMI as the end goal, but some healthcare professionals will actually treat overweight or obese patients with contempt and offer a poorer service, thus compounding the issue.

I urge you to listen to Laura Thomas PhD’s excellent podcast, featuring Dr Linda Bacon (great name!)  In it, Laura and Linda discuss the weight normative paradigm and how research now shows how health can actually come at any size if we make peace with our bodies and stop the fixation with thinness, calories and nutrients.  By eating mindfully, truly enjoying ALL foods, rather than engaging in a love-hate relationship where food is either ‘clean’ or guilt-inducing, individuals naturally move towards an overall healthier diet and more positive frame of mind.  When the focus is taken away from weight, BMI or body fat and moved towards the enjoyment of a rich variety of all foods, people can reconnect with their instinctive appetite and become healthier independent of weight loss.

This is a game changer.  That we can be healthy even if the scale says we’re overweight (and some studies show that longevity is greatest in those with an overweight BMI) should totally reframe our view of what body is acceptable in our society.  It’s time to speak out against fat shaming and embrace health at any size.