Beauty and the beach

The curse of the buffet: when genes and all-you-can-eat collide 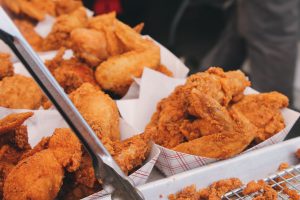 Hotel buffet, how we love thee.  Jelly for breakfast, 24/7 burgers and the all-you-can eat dessert buffet…  Sound like culinary heaven or a recipe for disaster?

I’ve recently returned from my honeymoon in Mexico where we stayed in a beautiful, all-inclusive hotel in which there was a limitless supply of food and drink, 24 hours a day.  The food was pretty good quality; a lot of it excellent and every palate, however fussy, was catered for.  There were a la carte restaurants serving Thai, Italian, Japanese or Mexican specialities as well as the ubiquitous buffet restaurant, in which every night you could dine on any cuisine under the sun.  Now I’m not here to tell you about my honeymoon but I saw first-hand in the hotel buffet quite how much our obesogenic environment influences what and how much we eat.

I bore witness to a wide variety of meals consumed by the hotel guests, from the joyless breakfast plate, prudently garnished with scrambled egg white and a solitary slice of melon to the mound of chicken nuggets, unadulterated by vegetables, moistened only with ketchup and voraciously inhaled.  There’s a certain magic about the power of the unlimited buffet to make even the most bird-like of appetites crave a taste of just a little bit more.

Obviously, on holiday, there’s only a certain amount of damage that you can do, as you are only there for a couple of weeks at most (although I did manage to successfully boost my tequila tolerance to impressive levels) but our environment at home may not be too dissimilar to the unlimited buffet (although hopefully minus the breakfast jelly).  We live, in the Western World, in a time of plenty, where calorie-dense, highly palatable food is abundant and cheap.  Yet we evolved in a time of food scarcity, where the next meal was unpredictable in terms of its quantity, nutritional quality and timing.  We are genetically hardwired to seek out energy-dense foods to help us lay down stores to serve us in leaner times.  How do we identify those foods?  They taste sweet, salty and/or fatty.  They elicit what’s known as the hedonic response: eating these highly palatable foods stimulates the reward centres of the brain, releasing dopamine and creating feelings of pleasure, even when we are not hungry.  While this adaptive response to times of food scarcity serves an evolutionary purpose, it’s a liaibility in today’s food rich environment.

However, not everyone mainlines a packet of biscuits if they’re on their desk at work and not everyone devours every food item at a buffet.  In this obesogenic environment, not everyone is obese, not even people living in the same household (as exemplified by research in identical and non-identical twins).  So is there still an element of personal choice?  Are those most susceptible to buffet fever just really well adapted to an environment in which we no longer live?  Or are they just lazy and lacking in willpower?

There is a great deal of resistance among even healthcare professionals to accepting that obesity might have genetic determinants.  But this is indeed the case.  We know that height is determined primarily by genetics (albeit with better nutrition contributing to an increase in average height in Western countries over time) so why is it thought so unusual to find that weight also has a genetic component?

We now know that mutations in a single gene can result in obesity, usually mediated by the effects these mutations have on energy intake.  These so-called monogenic human obesity systems are well characterised.

For example, deficiency of or resistance to the effects of the hormone leptin causes a hugely increased appetite from birth.  Children with this genetic disorder will eat indiscriminately, even consuming frozen fish fingers if the freezer is not locked.  This so-called ‘hyperphagia’ causes extreme obesity.  Leptin is produced by fat cells in the body and signals when the fat stores are insufficient, thus telling the brain that more food is required.  Leptin is actually known as the satiety hormone, signposting when to stop eating.  But those with leptin deficiency effectively feel as if they are starving, even when they are morbidly obese, triggering the characteristic voracious and pathogenic appetite.  Cases in humans have been controlled by leptin injections, which restore a normal appetite and body weight.

Another well characterised case of monogenic obesity is where a gene producing a protein known as POMC is affected.  This protein, under normal circumstances, plays many roles in the body, one of which is the regulation of energy balance (how many calories we eat vs how many we expend which, broadly speaking governs whether we lose, maintain or gain weight).  When POMC is no longer produced or the protein is abnormal in some way, due to genetic mutation, affected individuals experience problems, again in the brain, in regulating energy balance, leading to overeating and obesity.

To be clear, these monogenic mutations are rare and extreme.  And it would not seem that their frequency is increasing.  So the increase in obesity prevalence is not due to an increase in these rare mutations.  The obesogenic environment, typified by an abundance of cheap, palatable, energy dense food and coupled with far more sedentary lifestyles has been branded the culprit but as we know, not everyone responds to this environment in the same way, resulting in a huge variation in individual body mass.

The likely cause is a combination of many more subtle genetic variations that exist in individuals across the population, which have a multiplicative effect, interacting with the environment to result in varying degrees of overweight or obesity.  Each individual variation may have only a modest impact on body weight, in individuals with the ‘faulty’ gene (for example, individuals with two copies of the affected FTO gene are only, on average, 3kg heavier than those with two copies of the unaffected one) but together, many gene mutations can combine in a variety of ways to result in what’s known as polygenic obesity.  It’s a fiendishly complicated picture but what is becoming clear is that the majority of so-called obesity genes that have been characterised so far act in the brain and affect eating behaviour and not metabolism or how much fat we store.

The FTO gene, for example, appears to affect both satiety and food responsiveness.  We should ideally stop eating when our body has had enough to eat to fuel our physiological needs.  That’s when the satiety response should kick in, telling us to put down the knife and fork.  But those with an impaired response will naturally keep eating beyond a point at which sufficient energy has been consumed.  Food responsiveness relates to how tempted we are by food, irrespective of true hunger or physiological need.  The brownie effect, if you will.  After a main course has been eaten to sufficiency or even beyond, there is still ‘room’ for a brownie, even if we don’t physically ‘need’ a brownie.  Food responsiveness can also apply to how easy we find it to resist our favourite foods if they are readily available, for example at home or in the office (who can resist the office treat table?)  We have varying degrees of food responsiveness and it appears that some variants of the FTO gene can increase the degree of individual food responsiveness.  The overall outcome of these effects is an increased energy intake and therefore a higher BMI than those without the affected FTO versions.  Interestingly, the effects of the FTO mutations can be mitigated with a more active lifestyle.

Our individual combination of FTO-like mutations, each subtly affecting our appetite, satiety and food responsiveness to a greater or lesser degree is, to quote the inimitable Giles Yeo when he spoke at The Rooted Project, the genetic hand of cards you are played in the game of life.  It’s possible to win with a bad hand – you can to some degree overcome some of the behavioural traits that predispose you to overeating – but it is undeniably harder than it is for someone who quickly feels full and who can casually walk past the hotel dessert buffet without a second glance.

We are only scratching the surface of our genetic knowledge but what is very clear is that obesity is due to the overconsumption of calories; WHY we overconsume calories is a hugely complicated and emotive issue, driven by the complex interaction of our genes with our obesogenic environment.  So let’s avoid fat shaming and ridiculing those who struggle with their relationship with food and have a little sensitivity.  We clearly cannot change our genes but we can change our environment and that is not just down to individual responsibility.  Changing the obesogenic environment requires a top down approach and collaborative action on behalf of regulators, the food industry, healthcare providers and media.  It’s a tough job but doing nothing and simply fat shaming individuals is not the answer.