Water water everywhere but how much should I drink?

Deadly food: Is eating bacon as bad as smoking? 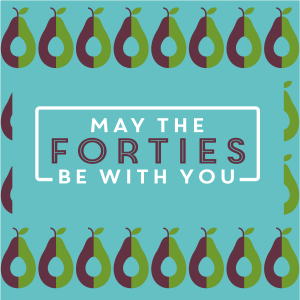 Eating 2 slices of bacon a day increases your risk of bowel cancer by 17%. Alarming statistics like this abound in the media, suggesting that eating food X will increase your risk of cancer, stroke or dementia by what can seem like a huge percentage. Similar stats regarding how food Y (usually something green or purple like kale or blueberries) will decrease your risk of disease by an equally large percentage lead many to (erroneously) conclude that “food is medicine”. While it is true to say that the way we eat and generally live our lives can influence our risk of disease, the way nutrition is portrayed in the media is highly misleading. Caution: contains maths.

Don’t mess with my bacon

I remember when the bacon story broke in 2015, people took to social media in outrage saying that public health had gone too far. It would seem that, as a nation, you can’t take away our right to enjoy a bacon sarnie! Let’s unpick what’s going on with bacon and then apply it to other food-disease risk equations (and hopefully put your mind at rest too!)

The International Agency for Research on Cancer (IARC), part of the World Health Organisation, released a report that reclassified processed meat like bacon and sausages as “carcinogenic to humans” and placed it in the same group (Group 1) as tobacco. This prompted many headlines declaring that eating bacon was as harmful as smoking (more on that analogy later). The  experts at the IARC  concluded  that eating a  50 gram  portion  of  processed  meat  daily (equivalent to a couple of rashers of bacon or slices of ham) increases  the  risk  of  bowel cancer by 17%.

Just to be clear, processed meat is “meat that has been transformed through salting, curing, fermentation, smoking, or other processes to enhance flavour or improve preservation.” We’re talking bacon, sausages, salami, frankfurters, pepperoni; you know; all the delicious stuff!

Now this advice was based purely upon the quality of evidence. The group looked at over 800 studies and concluded that the link between eating processed meat and cancer was strong because the evidence was high quality, some of it was in humans rather than animals or in vitro studies and the same results were confirmed multiple times.

These people are serious scientists and what they are saying is not wrong. Eating 50g of processed meat a day, DOES increase the relative risk of bowel cancer by 17% (I’ll explain what this means very shortly). It doesn’t increase your individual risk necessarily by the same amount because we are individuals, not populations and we are all different.

What about red meat? Don’t take away my steak!

Red meat is in Group 2A of the IARC’s classification system which means that it is “probably carcinogenic to humans”. The lack of confidence is due to the fact that studies in humans are limited and the higher quality evidence mainly comes from animal studies.

Note that white meat like chicken and turkey and fish don’t appear to increase the risk of cancer.

How does processed and red meat cause cancer?

We don’t yet quite know how processed meat or red meat might cause cancer. It might related to naturally present chemicals in red meat that are broken down into potentially cancer causing compounds in the gut or it might have something to do with nitrate preservatives added to ham, bacon and sausages. The jury is still out on this one because nutrition is a young science and our diets are so varied and complex, it is often very hard to isolate individual causes of disease.

Now, I like maths but what I don’t like is when statistics are used to confuse people to sell a story and make it sound more newsworthy. This 17% figure is what’s known as a relative risk. The ACTUAL risk of getting bowel cancer over your lifetime is much smaller. In real terms, eating 50g bacon, ham, salami or sausages a day vs none would increase your chances of getting bowel cancer from 56 in 1000 (5.6%) to 66 in 1000 (6.6%).

The truth is: eating bacon DOES increase your risk of cancer but in the grand scheme of things, the absolute risk is fairly low and shouldn’t put you off a Full English at the weekend; just maybe don’t eat a ham sandwich every day.

Is eating bacon as bad as smoking cigarettes?

Absolutely not. Research shows that if you smoke 25 cigarettes a day, you are 25 times more likely to develop lung cancer than a non-smoker, which is a staggering 2500% increased risk. If no one smoked, there might be almost 65 thousand fewer cases of lung cancer in the UK vs around 900 fewer cases of bowel cancer if no one ate processed or red meat.

This graphic from Cancer Research UK summarises the evidence and magnitude of effects neatly. 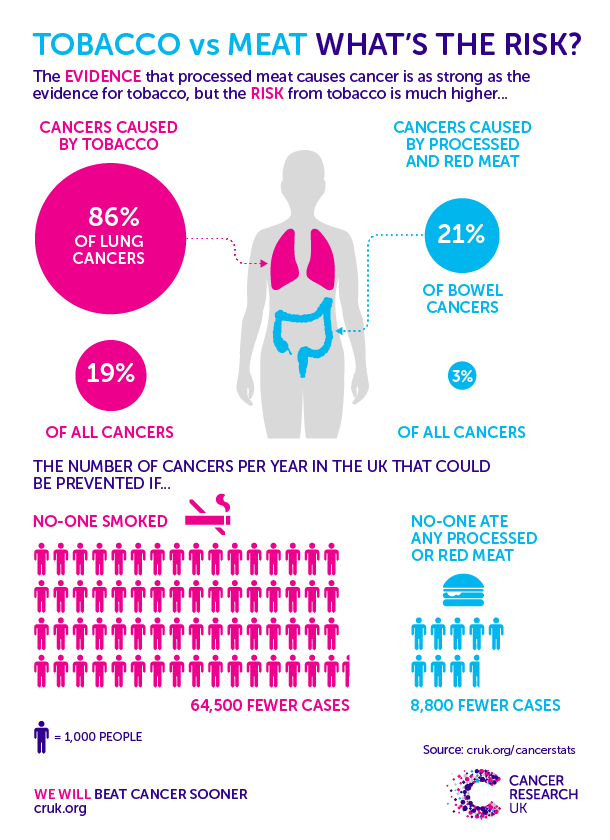 What is clear is that the Group 1 classification for smoking, processed meat (and in fact, being a hairdresser) when it comes to cancer risk reflects the strength of the evidence and not the size of the effect. Smoking is far more dangerous to health than eating any particular food so we always need to keep this in perspective.

Professor David Phillips, when advising Cancer Research UK, described the classification system very well. The IARC’s job is to identify hazards, not risks. It is possible to have an accident by slipping on a banana skin or being hit by a car. It is rather unlikely that you will slip on a banana skin and, if you did, it’s unlikely that you would be as badly injured as if you were hit by a car. But the IARC would put both banana skins and cars into the same group as potential accident-causing hazards. Our analogy above would have bacon as the banana skin and cigarettes as the car.

Remember, ultimately, these risks, in absolute terms, are pretty low when compared with the effects of smoking on cancer risk. It’s important to look at the overall diet and try to eat a wide variety of foods. Red meat can offer a valuable source of iron which is particularly important for young women and active individuals. Of course, there is the environmental impact of eating meat so that should always be factored into any decisions we make about what we eat.

My recommendation would be that, if you don’t want to go vegetarian or vegan, you don’t have to purely for health reasons (though you may wish to do so for ethical or environmental motivations). Red and processed meat can certainly form part of a healthy, balanced diet but I would certainly recommend eating less and choosing more ethical and sustainable sources.

My top tips would be: